The King Midas, a Gerald Genta masterpiece that became a Rolex iconwatch

In the late 1950s, Rolex commissioned Charles Gerald Genta, the famous Swiss watch and jewelry designer, to design an innovative and significant jewel watch. Gerald Genta is widely regarded as the greatest watch designer of all time. His most famous masterpieces are undoubtedly the Royal Oak by Audemars Piguet and the Nautilus by Patek Philippe. However, Genta also collaborated with many other Swiss watch manufacturers. Among his many creations are Universal’s Polerouter, IWC’s Ingenieur, and Omega’s Constellation. Asking Genta to design a new watch meant having the best of the best in the field of design, and that’s what Rolex executives wanted for this new watch : absolute excellence.

Rolex management had been clear: it required Genta to produce a jewel-watch for its wealthier and more discerning clientele. The watch had to be made of a precious, luxurious material, but at the same time not be ostentatious and have an innovative design. Gerald Genta drew inspiration from ancient Greece and its mythology to create a true masterpiece, a watch that was certainly not commonplace in the 1960s. The asymmetrical case recalls the architectural silhouette of the Parthenon in Athens, with engravings on the bracelet representing the columns, while the winding crown on the left symbolizes the sun dominating the summit of Mount Olympus.

Genta chose the name King Midas for his watch, in reference to the mythological King Midas, known in Western culture for his proverbial golden hand that turned everything he touched into precious metal. So the Rolex King Midas was born, a watch with an extraordinary design soon to become a true Rolex-Genta icon. The name Midas, chosen by Genta, was truly the icing on the cake for such a magnificent watch as it really looked like a watch that King Midas himself would wear! The asymmetrical case in 18 carat white or yellow gold was crafted by expert goldsmiths from a single block of gold.

In addition to the asymmetrical case design in full gold with winding crown on the left side, other notable features of the original King Midas were the ultra-thin hand wound movement based on a Piaget caliber, the double folding clasp integrated with the bracelet, the dial layout coming with the word MIDAS in Greek lettering.

Another outstanding feature of the Rolex King Midas is the original box-set. The ancient Greece theme was also taken up in the packaging. Namely, the original set consisted of an outer box with typical Greek decorations and figures, the box was shaped like an urn with printed pictograms similar to those found on real Greek artifacts.

The very first Rolex King Midas was reference 9630 and was produced from about 1961 to 1972. Very few examples of this Rolex watch were made: about 800 in yellow gold and 150 in white gold. Later, other Midas references were produced with similar characteristics, but they were not identical to the original. In the second series King Midas (reference 3580) the word “MIDAS” was gradually replaced by “CELLINI”, the third series King Midas (reference 4315) had a thinner bracelet, a caseback with screws and a single fold bracelet. Other models coming with leather straps or/and different case dimensions, finishes and shapes were also launched over the years. Although these versions are undoubtedly charming and of high quality, they cannot be compared to the original King Midas reference 9630, designed by Genta himself.

The first series King Midas with reference 9630 in white gold are extremely rare timepieces, very few have been produced and even fewer have come to the present day in collectible conditions like the present specimen. Coming with all the original box-set, guarantee and in exceptional condition this Rolex King Midas 9630 is for sure one of the best examples now on the market.

The following pictures depict the Rolex King Midas 9630 available on our e-shop. 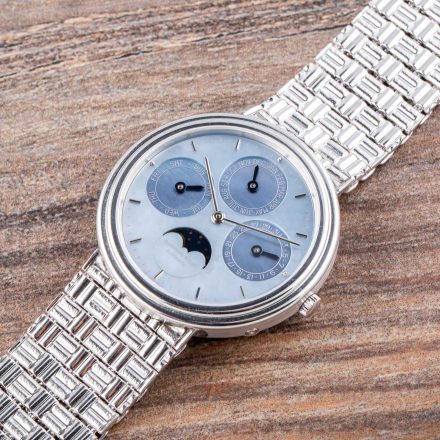