Many enthusiasts believe that the Rolex Turnograph reference 6202 is the very first steel sports watch that Rolex has ever made. The reason for this lies in the fact that while it was called Turnograph because of its rotating bezel, its technical and aesthetic features were virtually identical to those later used on the Submariner. Rotating graduated aluminum bezel, A286 automatic movement, water-resistant steel case with screw-down back and crown, the black dial are also found on the Submariner, the quintessential Rolex sports watch.

The Rolex Turnograph 6202 was introduced in 1953 circa, while the first Submariner reference 6204 was not launched until 1954. The Turnograph 6202 was thus a precursor to the most iconic Rolex sports watch. As mentioned above, the watches were essentially identical, except for the case size of 35 mm for the 6202 and 37 mm for the 6205, the slightly different graduated rotating bezel, and of course the name printed on the dial, Turnograph in one case and Submariner in the other.

In the 1950s Rolex, although already a successful business, was still a small watch company that carried out projects and innovations, experimenting with different technical and aesthetic solutions in a constantly evolving market. It is therefore logical to think that the Turnograph 6202 was a kind of experimental watch that paved the way for purely sporty models like the Submariner.

After the short production time of reference 6202, the Turnograph was radically changed to differentiate it from the Submariner, first with the 6309 reference and then with the 6609. These two mid 50’s new Turnograph models resemble much more a Bubbleback watch in their lines and shapes, the bezel is no longer printed but engraved in relief, they were also made of precious materials and equipped with an automatic movement with date function.

The legacy of the Turnograph continued over the years and now went its own way, with technical features and aesthetics very different from those of the Submariner. Over the years, many references were made in different materials, bracelets, and dial configurations, but the date function and rotating bezel engraved in relief were retained. The Turnograph was discontinued in 2011 after nearly 60 years of production.

The Rolex Turnograph ref. 6202 was only produced for a very short time, about two years, and is now highly sought after by collectors.  Despite the short production time, there are several versions of the Turnograph 6202, which differ in some details, such as the bezel type, the hands and the dial. The fact that there are different versions of a watch that was produced over such a short period of time further proves how much Rolex experimented and tried different styles to tap into the professional diving watch market.

In the standard production we can identify two types of dials: the rare galvanic with honeycomb texture and the more classic one with standard glossy surface.

There are also several types of bezels, with or without red triangle and with slightly different positioned numerals. The hour-minute hands also come in both Mercedes and baton shapes, as does the continuous seconds hand, which can be baton or “Lollipop” shaped.

Throughout production, the caliber remains the classic self-winding A286, which is also typical of some first-series Submariners like the 6204.

There are also exceptionally rare versions of the Turnograph that were produced in very small numbers, for example those with a white dial or those with prototype names such as “Monometer”.

This Rolex Turnograph ref. 6202 from 1954 is an exceptional specimen of this rare Rolex sports watch. The overall condition is extremely good, the case looks unpolished, the bezel inlay is intact and original to the watch, the caliber works perfectly, the bracelet has no stretch.

The dial is in very well preserved although over the years it has partially lost its glossy finish, which is absolutely normal for a watch of this age. The gilt graphics are perfect and original, as are the radium lume on the hands and hour markers.

Note that, as with Turn-O-Graphs of this era, the luminous index at 6 of the clock is brighter than the other radium numerals. Rolex most likely designed this to improve readability. 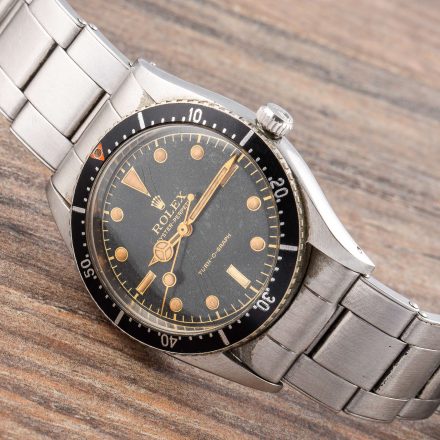